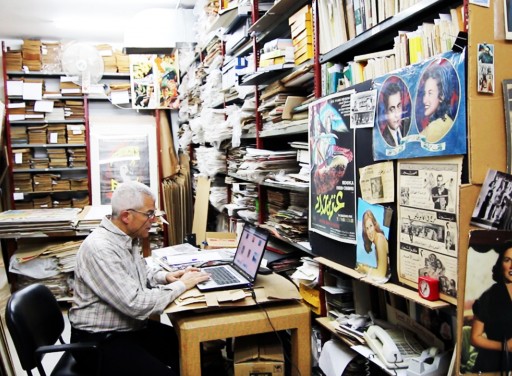 Lebanon, Beirut – It is in Hamra District where Abboudi Abou Jaoude saves his collection of vintage posters of Arabic movies golden age. It all started with his passion to cinema that he inherited from his father when he was a small boy. Then he started collecting film posters.

Today his collection of approximately 20.000 vintage pieces includes posters from Egypt, Lebanon, Syria, Iraq, Tunisia, Algeria and Morocco, along with numerous pieces from Europe and America.

Last year he released the book “Tonight, Cinema in Lebanon 1929-1979”. It reflects his long years of systematically collecting the vintage posters of movies filmed in lebanon during fifty years, from the 30s to the 70s. The book release was accompanied by the exhibition Haza el-Masa’ (which means “Tonight”) that took place in Beirut at the Yacht Club, it immerged the visitors in forgotten times, the famous period of local cinema, before the start of what was called “The Lebanese Civil War” in 1975.

An interesting analytical article about this collection can be found on the blog: Art and Culture Today. Other articles can be found on CNN and L’Orient Le Jour websites.